On March 30, Hannah Edelen and Matt Frey were announced as the 2018-19 student body president and vice president, taking 52 percent of the vote for Student Government Association’s top office.  During their run, Edelen and Frey said they would work to impose a dead weak before finals, get more student discounts at local business and hold public forums on student issues.

Edelen is a junior pursuing a double major in economics and communication studies.  She was a 2017 Orientation Leader, Victor Guide and current Resident Assistant in University Housing.  She serves as the Vice President of Member Education for Kappa Delta Sorority and is a member of the Order of Omega.  Before being elected as President of Student Government Association, she served as Senator, Vice Chair of Student Rights and Secretary of Public Relation, where she was the official spokesperson for the organization.  During her times with Student Government Association, she saw two of her resolutions pass – NKU Jerseys and NKUnity.  On top of her busy schedule, she manages to find time to intern in Frankfort, Kentucky, with a senator during the week.

Frey, a junior economics major, has been working on research for the University since the beginning of his sophomore year.  He presented research on the US Citizen’s Financial Literacy at the Student Research and Creativity Celebration last year and currently works as a Student Fellow in Applied Business Research at the Center for Economic Analysis and Development.  When Frey is not doing research, he serves as the Membership Educator for Alpha Tau Omega Fraternity and is an active member of the Norse Economics Club.  Additionally, Frey served as the President of NKU’s Vertical Frontier Climbing Club, where he brought philanthropic bouldering competitions to NKU.  Frey and the club were able to raise $2,000 for Red River Gorge Climbers’ Coalition in five competitions.

The president-elect and vice president-elect received an overwhelming amount of support from their peers, many, taking their voices to Twitter, Instagram and Facebook.  Fiona Waters had this to say about Edelen and Frey, “These are two of the most driven individuals I have ever met.  I can feel the passion they both have for the greater good of NKU and whenever their platform ideas were questioned, they always had thought out and concise reasoning behind each one of their ideas.  It is evident that they did their research and aren’t taking this responsibility lightly.” 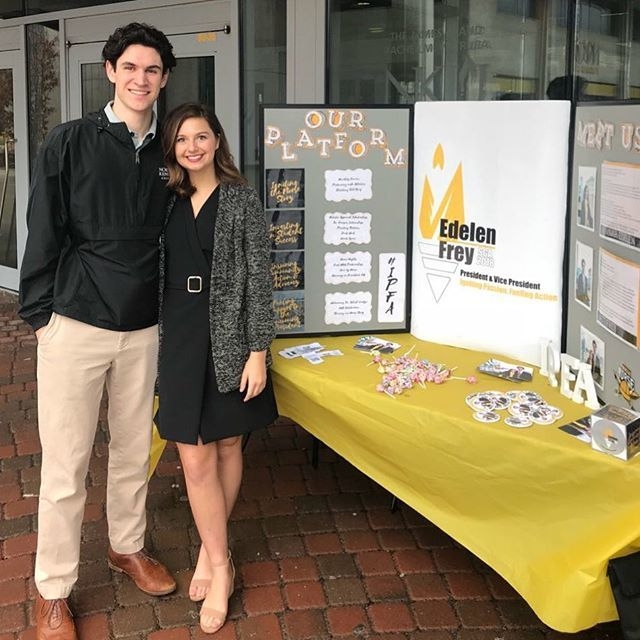 Edelen and Frey spent many hours attending forums presented by the Northern, NKU's Independent Student Newspaper, and tabling outside the Student Union to ensure that student voters fully understood their platform.