Gordon Martin is known for being one of the pioneers of Northern Kentucky– not just building homes for the returning World War II veterans but also for fostering a sense of community. He was instrumental in establishing the Northern Kentucky Chamber of Commerce in 1969 and was appointed to NKU’s Board of Regents in 1972, serving as Chair in 1982. Thelma was active in the Erlanger United Methodist Church and the Florence Women’s Club.

“Naming our gathering space in the Student Union after Gordon and Thelma Martin feels especially appropriate because they worked so tirelessly for the region and the people who live here. Their love for the community and vision for what Northern Kentucky could be, shaped our identity– not just as three counties, but as a unified presence in the Commonwealth full of diverse and passionate people ready to make an impact, like the Martin family has,” said NKU President Ashish Vaidya.

Corporex Companies, LLC Chairman and longtime NKU supporter Bill Butler also shared praise of his good friend, reminiscing about the first meeting Gordon more than 50 years ago when he talked him into joining the NKY Chamber. 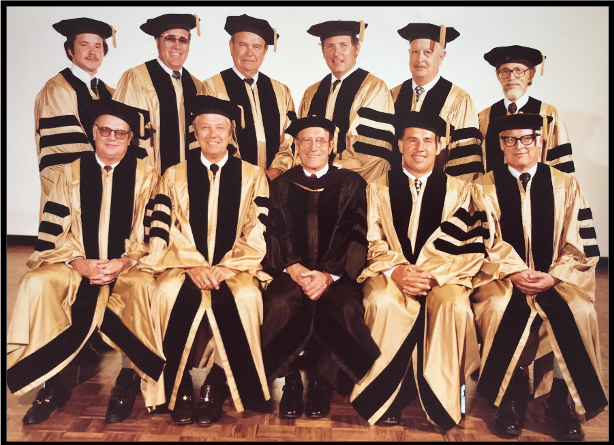 Martin with fellow NKU Board of Regents' members

“Gordon was passionate about the recently merged Chamber of Commerce, he being its first President. It was that same unrelenting persuasiveness that caused a young guy to put his money in a place he would least suspect at such a critical time, that contributed to convincing the Governor and Legislature to invest in the Northern Kentucky University campus,” said Butler. “Gordon’s passion for the community and its evolution to unity, to dignity in respect to our peers, and to the Northern Kentucky University was simply bountiful, unending, relentless.”

Gordon and Thelma raised their three sons, Douglas, David and Steven, on a farm near Union. Douglas Martin says his parents loved the region and lived here for their entire lives.

“My father really helped build Northern Kentucky–from the houses to the Chamber. He even led the charge to get Louie B. Nunn to sign off on creating Northern Kentucky University. My mother was a true partner with my dad, helping support him every step of the way,” said Martin. “They would be thrilled to see how far we have come, and I’m very proud to see them honored this way.”

The H. Gordon and Thelma Martin Ballroom has a capacity more than 600 and is used to host many university-wide gatherings and community events, including the recent Gubernatorial debate last fall. The Student Union was dedicated in Sept. 2008 and serves as the center of student life.