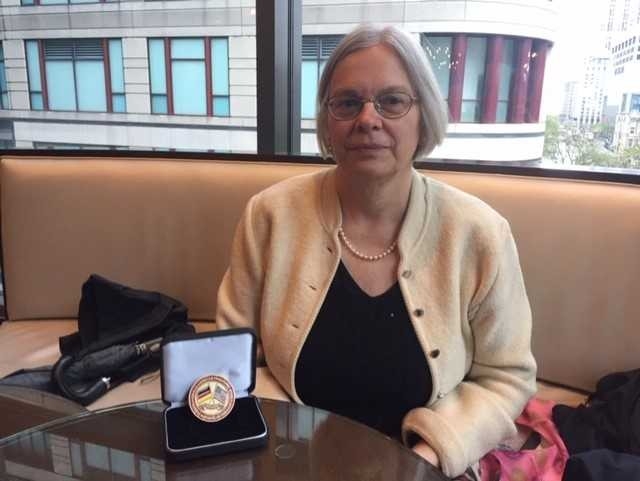 June 20, 2019— Nancy Jentsch has received the German-American Friendship Award. The Consul General of the Federal Republic of Germany, Herbert Quelle, presented Jentsch with the award at a ceremony in Chicago in May.

The German Embassy in Washington, D.C. established this award in 1981 as the highest honor given to Americans from the German government. Jentsch is a senior lecturer of German and Spanish at NKU and has been an advocate for German-American relations for the past three decades.

“This award reflects what I have tried to do in my life, both personally and professionally. Ever since I was young, I wanted to learn about my German heritage, and that led me to learn the language, as well,” said Jentsch.  “Receiving this prestigious award towards the end of my career feels like a lifetime achievement award. My accomplishments in promoting German-American friendship and cooperation have happened over many years and in many different ways, and the recognition takes all of my efforts into account.”

Jentsch currently serves as the German Club faculty advisor and leads German activities for her students, including German conversation hours and movie nights. She also instituted the Department of World Languages and Literatures study abroad award and has taught on study abroad programs in Germany and Austria since 1988. Beyond the classroom, she continues to volunteer in the northern Kentucky and Greater Cincinnati German community.

The German Consulate in Chicago and the German Embassy have been supporters of NKU’s German program over the years, regularly inviting the university to participate in “Campus Weeks” events. The Embassy extends invitations to only around 40 universities in the U.S. each year to fund a week of activities for students related to German language and culture.

For more information on NKU’s German Program, visit its website.