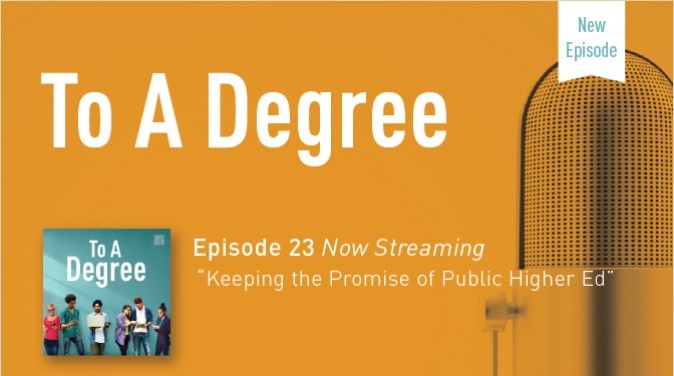 To A Degree is the Gates Foundation’s postsecondary success podcast that highlights the people, institutions and organizations working to provide all students with a high-quality and affordable higher education experience.

The American Association of State Colleges and Universities (AASCU) collaborated with To A Degree and the Gates Foundation to capture the perspectives of campus leaders at its 2018 Annual Meeting in late October. To A Degree recorded three podcasts at the meeting focusing on leadership and innovative solutions to improve equity and student success.

President Vaidya represented NKU at the AASCU Annual Meeting and took part in the “Keeping the Promise” podcast. He is featured with Shippensburg University of Pennsylvania President Laurie A. Carter and State University of New York at Fredonia President Virginia Schaefer Horvath.

“It was an honor to join my counterparts and discuss the challenges facing public universities, including access, funding and accountability,” said President Vaidya. “Hearing the perspective of other AASCU institutions was extremely valuable. We are all working toward the same goal of fulfilling the dream of higher education.”

To listen to President Vaidya’s discussion, click here to access To A Degree’s “Keeping the Promise” episode.

About American Association of State Colleges and Universities: AASCU is a Washington-based higher education association of nearly 420 public colleges, universities and systems whose members share a learning and teaching-centered culture, a historic commitment to underserved student populations and a dedication to research and creativity that advances their regions' economic progress and cultural development.