November 2, 2018– Northern Kentucky University’s Center for Innovation and Entrepreneurship (CIE) has been named among the best in world at launching and supporting student-led startup companies.

The CIE was selected as one of the five finalists for the “Outstanding Contribution to Venture Creation” award at the 2018 Global Consortium of Entrepreneurship Centers’ (GCEC) annual conference. This is the second top five listing the CIE has received from the GCEC in recent years.

NKU is among some great company for the 2018 honor–Michigan State, Babson College, The University of Notre Dame and University of Stockholm, Sweden. The CIE was selected from over 100 submissions that were reviewed by peer institutions to recognize the very best in entrepreneurship education. 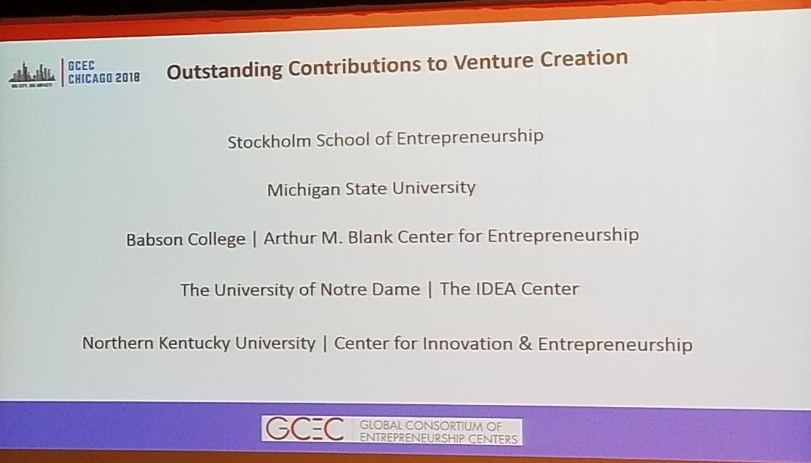 The CIE, housed within the Haile/US Bank College of Business, is led by interim co-directors, Jeff Varrone and Zac Strobl. The Center was created in 2014 to be the hub for students across campus who desire more out of their college education. Students take ownership of their future through innovation and entrepreneurial activities both inside and outside the classroom.

“The CIE is built on a strong foundation and has recently been one of the top performing entrepreneurship centers not just nationally, but globally as well. This recognition is largely due to the success of the students and alumni who have graduated from our programs,” said Zac Strobl, interim co-director.

The CIE is home to an award-winning curriculum that offers both a major and minor in entrepreneurship. The GCEC listed NKU as a top five finalist for the 2016 “Outstanding Contribution to Venture Creation” award. The CIE also received the GCEC’s 2015 “Exceptional Activities in Entrepreneurship Across Campus” award. The GCEC is the premier academic organization addressing the emerging topics to the nation’s university-based centers for entrepreneurship.

“More and more institutes of higher education are recognizing that teaching entrepreneurial skills are key to the success of our students and the world’s future economy,” said Burke, GCEC executive director.

The 2018 GCEC Conference hosted more than 250 top universities from around the world in Chicago from October 18-20.

About the Global Consortium of Entrepreneurship Centers: The GCEC was established in 1997 for the purpose of becoming the key junction for university-based entrepreneurship centers across the U.S. to collaborate, communicate, and jointly advance excellence in entrepreneurship through the unique role and position of the centers in the academic and business communities. The GCEC has become the vehicle by which the top, established entrepreneurship centers, as well as emerging centers, can work together to share best practices, develop programs and initiatives, and collaborate and assist each other in advancing, strengthening, and celebrating the role of universities in teaching the entrepreneurs of tomorrow. It is comprised of over 200 member centers.