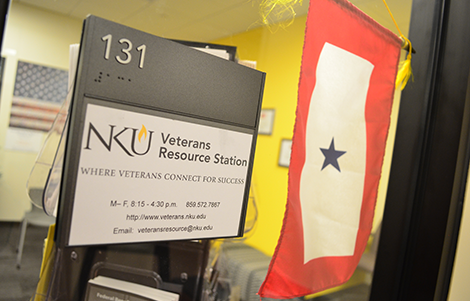 May 2, 2018– Northern Kentucky University has once again been named a Military Friendly School by Victory Media, the premier outlet for military personnel transitioning into civilian life.

Victory Media awarded NKU the 2018-2019 Gold Award for embracing military service members, veterans and dependents as students to ensure their success on campus. This is the eighth consecutive year NKU has received this designation. Service members use the Military Friendly® list to learn about post-military education and career opportunities.

The award is particularly meaningful to NKU Interim President Gerard St. Amand, who served nearly 25 years as an officer and lawyer in the Army's Judge Advocate General's Corps.

“As the only gold status institution in the Tri-State, it is a great honor to once again receive this designation as a Military Friendly® School. I congratulate the team at the Veteran’s Resource Station and to all faculty and staff who have played a part in recruiting, serving, and retaining these students,” said St. Amand.

The 2018 list of Military Friendly Schools® was compiled through extensive research and a data-driven survey of more than 8,800 schools nationwide approved for VA tuition funding. Methodology, criteria, and weighting for the list were developed with the assistance of an Academic Advisory Board consisting of educators from schools across the country.

NKU is also ranked among the nation’s top colleges for veterans in 2018 by The Military Times.